skip to main | skip to sidebar

It Died a Virgin 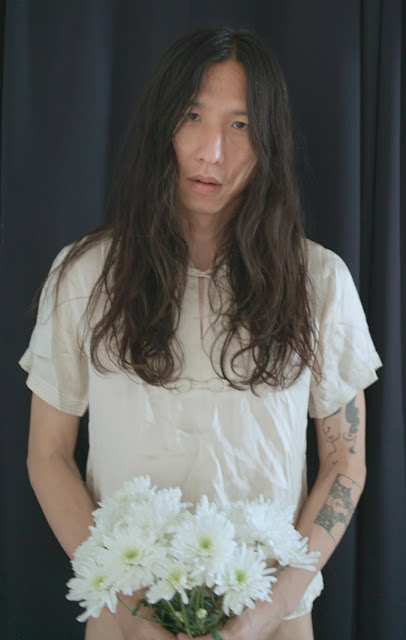 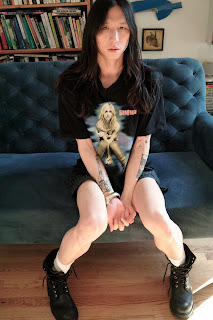 What you are about to read began as a suicide note for a blog.  Then I noticed that I was already dead.  I hadn’t written in Lipstickeater for twelve months, left it (my digital-textual body) in a vegetative state.  I left it for dead.
But if in this state, I suddenly wanted to compose a suicide note...it must mean that I am not dead after all!  Suicide notes cannot be posthumous.  Joy!  I am not going to kill myself, but I am still a little suicidal.
When you are unhappy with living and discover the notion that you can actually end your own life, it is scary but ironically, it returns to you a sense of yourself that everyone else wants to steal only so they can destroy.  In fact, there begins to gather a glamour about it in the very etymological sense of the word “glamour”: a dark haze over light.  Suicide becomes dangerously glamorous when you are ten years old and suddenly kids in the playground begin to torture you because you are obsessed with My Melody.  The years drag on from there as you get tortured for being homosexual before you know what homosexual is.  Then you conclude that all you want to do is disappear from the tangible world.
As a sullen teenager, I was a stereotype of a suicidal kid.  The world hated me and I hated the world right back.  I was literally the kid smoking under the bleachers while the student government led a pep rally for the football players and popular kids in Guess jeans.  Decades later, as I figure out my place in my professional world—which is the rarified and small one of academia and then, even smaller and more rarified queer academia—I found out that I am still the kid smoking under the bleachers.  It sucked.  It sucked and it hurt.  And hurt me so much that I wanted to kill off the textual body that was ignored and belittled by my professional world.
Sooner or later you discover Sylvia Plath, and you discover the idea of being suicidal. Plath is more than the gleaming frighteningly blond head stuck in an unlit gas oven.  In life, as a suicidal girl before she performed the act of suicide, she was a fiercely intellectual and doggedly emotional writer who used her pain as material and tool of her art.  What stopped the teenaged me from going on and through with suicidal attempts was the glamour of Plath the Suicidal.  “Being suicidal” is an identity that requires you to be alive.  It is characterized by a constant and nagging obsession with one’s own death, but one in which the death is also infinitely postponed, for if you go through with it, you are no longer suicidal; you are just dead. If you are “suicidal,” it means you are constantly haunted by thoughts of killing yourself, but you are living through it.  You write through it.  You remain “suicidal;” you don’t commit suicide.
This week, fifty years ago, Sylvia Plath committed suicide.  Last week, I found myself listening to Britney Spears for hours even though I never listened to her during her ubiquity in the early 2000’s, even though I didn’t actually own a single album of hers.  I must be a true vintage whore because most things feel sweeter and brighter when they are at least five or six years too old.  (Britney circa 2001 or 2003 is now truly “Vintage”!!)  History is softer, more yielding, more yielding to one of my favorite feelings, yearning.  So it is with Britney.  Another blond who had suicide on the horizon.  I think of her as always just about to burst into another breakdown, but only just so.  Unlike Plath, Britney’s good at the teeter-totter of living.  She makes dull soulless dance music, where “soulless” means not a lack of interiority but SATANIC!!!  Satanic as in: the refusal of a dogmatic definition of inner life.  The voice that combines a satanic spirit and a temperamental computer.  It takes a lot to soften that voice into something vulnerable, but when it happens it might be really sweet.  Her face is just this side of excessive inbreeding.  Enough makeup (a lot) and she can tread between white trash rough diamond and plastic doll.  I’ve been listening to her 2003 album In the Zone on repeat while struggling through some academic prose on embodiment.  Obviously she doesn’t have the gift of language that Plath had, but In the Zone is kind of like Plath’s Ariel.  It is high-gloss style confessional music that simultaneously signals the end of confessional music.  Music that is all about you yet nothing about you.  I purchased remixes of “Toxic” on iTunes and it sounded so right for the story I was working on.  I wrote the following lines: 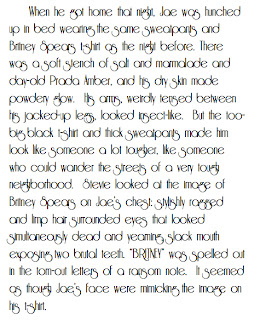 Afterwards, I went on ebay and found exactly the same old tour t-shirt I made my character wear. My character isn’t me, but after I wrote him to life I wanted to bend my flesh closer to his outlines.  I get nervous.  We’ll see.  We’ll see.


Posted by joony schecter better known as BLACK MISTRESS TINA at 10:50 AM No comments:

this is me...then (Black Mistress Tina)

I’ve been working out my body.  Not as in the 90s, when I believed that the thing to do with my femininity was to bury it under mounds of unnatural muscle.  No, these past twelve months have been about living in the 90s that I should have lived: working on getting my body to be the performative connector between my identity as girl and that as writer.  I am in the process of leaving Joony Schecter behind for a new identity that I’ve already begun building: A hausfrau and BDSM dominatrix of the emotions: BLACK MISTRESS TINA.
Black Mistress Tina is a hausfrau and BDSM dominatrix of the emotions.  The name is an homage to Debi Mazar’s character in Spike Lee’s 1996 film “Girl 6,” which is herself homage to Bettie Page and to the hard romantic pragmatism of a femme.  I have fallen in love with a man and we decided to cohabitate.  He is also a wonderful electronic musician.  One of his early gestures of winning me over was listing me as his “muse” in the description of a piece that he produced last summer.  But because my man Roddy is a modern man, he views “muse” as consonant with “partner.”  Historically, “muse” has been understood as a pure and passive body that exists solely to submit to the authoritative genius of the “artist.”  Of course, this history has been also used as a tool of the patriarchy, in which “muse” equals “woman” and “artist” is “man.”  From the beginning, Roddy saw me as a muse because he understood my femininity, but with a definite anti-patriarchal stance.  (This is partly why I love him.)
I then worked as muse on his “Violets,” a nine-minute sound piece in which all the samples that Roddy used as raw material came from me.  I was a traditional muse insofar as I was literally objectified: Roddy recorded my grunts, whoops, hisses, wails, and even humming Culture Club’s “Miss Me Blind.”  This process made me feel simultaneously troubled and elated; I was cut up into voice samples, made into a thing.  It was cutting of a different kind.  I saw my body fluttering helplessly on the cutting board and watching Roddy transplant a different pulse into it made the heart still in my own body beat hard and happy.  A piece of my body—my voice—was ripped from me and snipped and pieced together like a rabbit fur coat. I just snuggled in the luxuriousness of it all.  And when it came for Roddy to present the piece, he insisted that I be given credit as a collaborator, and asked me to come up with a bodily performance to go with the piece.
Which led to “The Rabbit Catcher.” This time, the work began with me: I’ve wanted to write a mourning piece for Whitney Houston ever since her untimely death last year.  But whenever I sat in front of my computer, all I could say was nothing.  I had the same reaction to her death as Mariah Carey: “I’m almost incapable of talking about it.”  So “Mourning and Melancholia: Whitney Houston” sat unfinished but for the quote from Mariah.  In the meantime, I got an idea to adapt one of my favorite poems, Sylvia Plath’s “The Rabbit Catcher,” as a performance piece.  I became fixed with the gesture of singing a song while eating my own hair.  I wrote a score for it, and Roddy and I set about thinking about what sound should come out of me. My job was to again provide Roddy with a stockpile of sonic raw material.  Immediately, I felt that the sound should be a recording of me being possessed by Whitney Houston.  I decided that I would transcribe in textual form all the sounds—including not only Whitney’s voice but the instruments—in the epic 10 minute remix of Whitney’s cover of “I’m Every Woman.”  Roddy would record me doing a “flat” reading of those texts, which he would re-cut into what he calls an “aural bed” in which the audience—and I—can luxuriate.  As he played his sound piece, I would then perform live another version of the transcribed text.  We performed a sketch version of the piece this past December at the Apexart.  We’ll perform an expanded and fully formed version in May.  But in the meantime: enjoy my new body, al dente.


The Rabbit Catcher from Roddy Schrock on Vimeo.
Posted by joony schecter better known as BLACK MISTRESS TINA at 3:13 PM No comments: 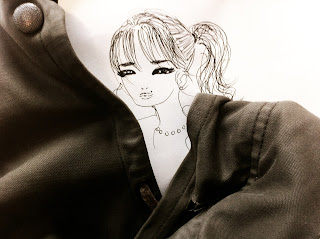 Posted by joony schecter better known as BLACK MISTRESS TINA at 8:49 AM No comments: